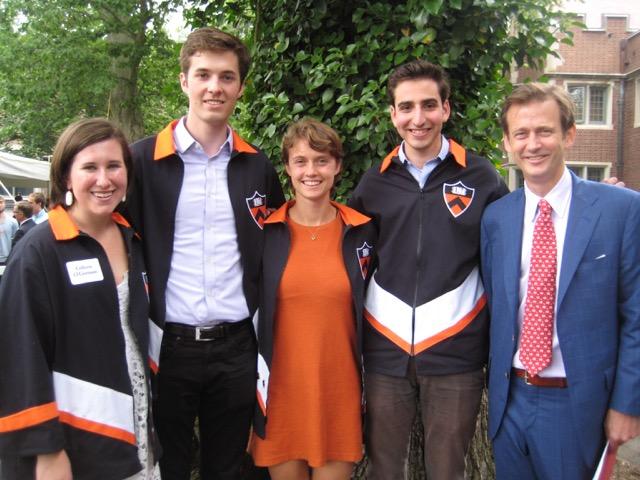 The Department of Politics recognizes exceptional undergraduate performance through a variety of prizes and awards. Information about those honors, as well as a list of recent recipients, are available below. See the honors calculation page for information regarding the determination of highest honors, high honors, and honors.

Established in 1985 by her family in memory of Caroline M. Picard, Class of 1986. It is awarded annually to the junior(s) in the Department of Politics who, in the judgment of the faculty, present the most promising senior thesis project(s) which needs summer thesis support.

Established by the Class of 1883 as a memorial to the Reverend Lyman H. Atwater, D.D., LL.D., Professor of Political Science, 1869-1883. It is awarded to the senior who has written the best thesis on a subject in political science.

Established by James Gordon Bennett. It is awarded to the senior who has presented the best thesis on a subject of contemporaneous interest in the domestic or foreign policy of the United States government.

Established by Philo Sherman Bennett of New Haven, Conn. It is awarded to the junior or senior who has written the best essay discussing the principles of free government.

Awarded by The James Madison Program in American Ideals and Institutions for the best senior thesis on a topic relating to the study of public or constitutional law.

Below is a list of recent Alumni (Politics Classes of 2016 and beyond) who were awarded departmental prizes for distinction in their senior theses. To view these prize-winning senior theses by primary field, click on the linked titles which will take you to the Mudd Library Archives for the given document.

Andrew Sheldon Brazer ‘19
“The Antifederalist Irony: How the Bill of Rights Opened the Door to the Nationalization of Policy-Making via the Federal Judiciary” -  Whelan Prize, Co-Winner

Miriam Shana Friedman ‘19
“The Identity of Power: An Analysis of the Internal Politics of the National Rifle Association” - Herald Prize, Co-Winner

Natalya Linglingay Rañeses Ritter ‘19
“Stuck in the Middle with You: The Role of Law in the Racial and Political Classification of Filipinos in America” - Sherman Bennett Prize, Winner

Layla Susan Varkey ‘19
“The Park, The Bohemia, The University: A Historical and Theoretical Analysis of Displacements of African-American Communities in Manhattan” - Atwater Prize, Co-Winner

Christine Casey Smith ’16
“A God By Any Other Name: Synthesizing Nondiscrimination and Substantive Liberty of the Free Exercise Clause” - Sherman Bennett Prize, Winner

Alexandra Markovich '17
"Why We Can't All Get Along: Interpersonal Conflict and Social Networks in Post-Euromaidan Ukraine" - Atwater Prize, Winner

Mikhael Gerardus Smits '18
"The Stranger Is You: A Biblical Framework for a Common Way Forward in the American Migrant Membership Debate"  - Whelan Prize, Co-Winner

Joshua Robert Zuckerman ’16
“The Most Important Director of National Conduct: Security, Interest, and Identity in the The Federalist” - Whelan Prize, Co-Winner